Making and Preserving History with a Bookeye

In 2009 when Robert Reiter started scanning, the 3rd generation of the Image Access overhead book scanners, Bookeye®, were the most advanced book scanners available on the market. “Scanman” Robert Reiter used the Bookeye 3 R1 on behalf of ICARUS (International Center for Archival Research), a non-profit organization that provides digital services for its more than 200 member companies. These include archives and scientific institutions from 34 European countries, Canada and the USA. The term “Scanman” was used by Dr. Thomas Aigner, President of ICARUS, since there is no specific job title for Robert Reiter’s work.

The platform Monasterium belonging to ICARUS offers free access to around 700,000 medieval and early modern documents as a virtual archive. In order to keep the platform up to date at all times, Robert Reiter digitized primarily parchment certificates and seals with the Bookeye 3 R1 onsite at the various archives. These particularly fragile templates require handling with a great deal of sensitivity and steady hands.

“I held more than 150,000 documents in my hands and scanned them with the Image Access book scanner. People are thrilled to see how a document retains its originality as a high-resolution scan and can then be retained for posterity, ”said the Austrian from Kuffern. ICARUS acquired the device at that time through ImageWare Austria GmbH, a European sales partner of Image Access. Reiter says that he still has a friendly relationship with Walter Hicker, Managing Director of ImageWare, and the comforting feeling that he can always rely on his service and competence when it comes to technical questions.

Reiter’s most recent appearance was on March 7th at the Archive Day in Ludwigsburg. Under the motto “Where history becomes vivid”, he introduced his work to interested visitors. In the past, he has been to the city of Baden-Württemberg several times and remained there for half a year in 2016 to digitize around 8,500 historical documents. Other locations included  the main state archive in Stuttgart, the Carinthian state archive and the Austrian state archive.

There is also another Bookeye 3 scanner at Reiter’s home. With this he digitizes various privately owned documents for the Topothek. The aim is to make private historical material and knowledge visible to the general public with the participation of the population (crowdsourcing) and to make it accessible to science as upstream field research.

Meanwhile in 2020 — The latest generation of the Bookeye overhead book scanner family, Bookeye® 5 is being rolled out by Image Access, starting with the Bookeye® 5 V3 scanner in three different models, which was released earlier this year.

Image Access has always adapted the technical functionality, handling and design of its scanners to meet current standards and go beyond the standards in form and function. Even a decade ago, the Bookeye 3 R1 already featured a resolution of 600 dpi, UV and IR-free LED lighting and high quality CCD camera optics. Now, since the release of the Bookeye 5 V3, heralding the beginning of the current new generation of book scanners; Image Access is preparing the rollout of the DIN A2 + models, which will be launched in the coming months.

With the new, magnetically coupled book cradle, the 21″ full HD multi-touch screen, preview function for optimal document positioning before scanning and a resolution of up to 600 dpi, Image Access offers an innovative product for libraries, archives, offices and much more with the Bookeye 5 V3. As the Scanman story clearly shows, Image Access ensures that its scanners are developed and produced for longevity and sustainability that is second to none.

And Robert Reiter? He will continue his mission as “Scanman” and will also continue to use the Bookeye family of overhead book scanners to ensure that as many historical documents as possible find their way into virtual infinity, as can be seen in this video, showing Robert Reiter digitizing documents from the Augsburg diocese archive: https://www.youtube.com/watch?v=LDm6Yg8IjSE 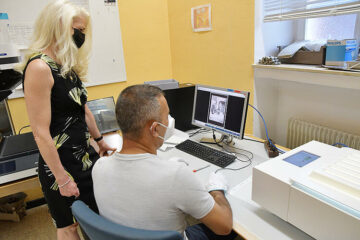 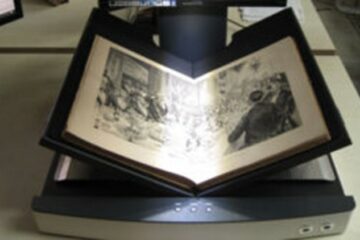